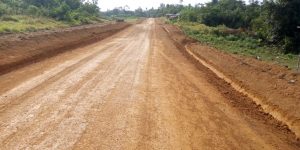 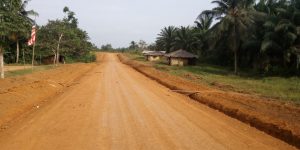 GRAND KRU, Liberia (March 6, 2020) – As part of its commitment to improving road network, Golden Veroleum Liberia (GVL) has embarked on the rehabilitation of several feeder roads and other major public roads in Grand Kru County ahead of the raining-seasons.

The road initiative which is part of the company’s corporate social responsibility (CSR) is targeting the Grand Kru Barclayville to Pleebo highway, as well as repairs of several bridges and roads linking major routes.

The company has been rehabilitating and maintaining roads in all of its project communities in Grand Kru, and it has undertaken several developmental projects such as the construction and rehabilitation of hand pumps, schools, town halls, pit latrines among others.

The Barclayville-Pleebo highway was one of the difficult highways in Grand Kru especially during the raining season. As the result of GVL road initiative, today there is easy access to Pleebo from Barclayville; promoting the free flow of goods and services in the county thereby boosting the local economy in that area.

It can be recalled, the Government of Liberia, through the Ministry of Public Works recently signed an agreement with Golden Veroleum Liberia (GVL) for the construction and rehabilitation of Laterite Roads in its area of operations.

The company being cognizant to the many challenges in the area of road construction has agreed to partner with the Government of Liberia aimed at constructing and rehabilitating laterite road in the southeast.

GVL agreed to hire Liberian Construction Companies in collaboration with the Ministry of Public Works to implement the pavement of the 272 km of Laterite Road from Pleebo in Maryland County, through Boah-Geeken, in Grand Kru to Greenville Port, Greenville to Wiah Town in Sinoe County.

GVL Chief Executive Officer Mr. Ferdy Surya Handojo has revealed that the road project from Sinoe to Grand Kru and from the Greenville Sea Port to Wiah Town in Tarjouwon, Sinoe, is expected to start very soon. Mr. Handojo said the completion of the road will promote the local economy and trade between the three southeastern counties.

“We are mobilizing the necessary logistics and at the same time finalizing discussions with Ministry of Public Works and other Government Agencies and we all hope that the road works can commence very soon” GVL CEO, Mr. Ferdy Surya Handojo.

Local communities continue to appreciate and recognize the social, infrastructure and economy benefits that GVL oil palm investment has brought to Grand Kru.