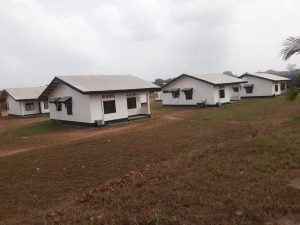 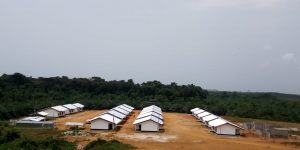 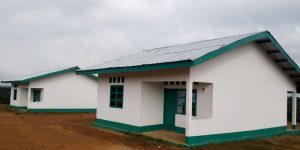 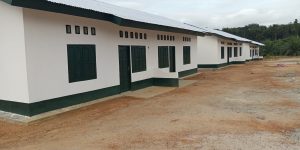 The first batch of 145 housing units will accommodate over 250 employees and their families in Sorroken, Wedabo and Garraway districts where the company is currently operating

GVL Human Resource Manager, Peter Doe-Sumah said the new housing units are being constructed in two different categories. Category one housing units are meant for managers and the units contain three (3) bedrooms, bathroom (flush toilet), living and dining rooms, back and front porches and a kitchen.

He continued that the second category of the housing units are built for staff and field workers and each unit contains two (2) bedrooms, bathroom (flush toilet), living and dining rooms, back and front porches and a kitchen with 24/7 electricity and pipe-borne water system.

He said the initiative by the company is in fulfilment of its concession and collective bargaining agreements with the Workers Union reiterating that the company is committed to promoting best labor practices and respecting the fundamental rights of its employees and the local communities in which it operates.

“We believe that we have a responsibility to respect, support and uphold fundamental human rights as expressed in the Universal Declaration for Human Rights and under the Roundtable on Sustainable Palm Oil (RSPO) Principles and Criteria (P&C; We are committed to being an equal opportunity employer; we respect our employees’ rights with regards to freedom of association, their freedom of movement and their rights for a safe and healthy working environment”, said Peter Doe-Sumah.

GVL Communications Officer, Darius Doe disclosed that apart from the new housing facilities, the company is also constructing several new permanent structures including warehouses, offices, clinic and other facilities to support its operations in the county.

“GVL came into the Southeast in December 2010 primarily determined to create a vibrant and substantial new economic sector. That is exactly what the company is doing; creating employment opportunities, infrastructure development and improving the livelihoods of local communities. GVL is doing all that is required in ensuring a sustainable oil palm development in Liberia”, said Darius Doe.