During the operations, individuals with various illnesses including hernia, hydroceles, goiters, uterus, and fibroids were treated. The program which exceeded its target of 100 persons included pre- and post-surgical treatment, feeding of patients and transportation of targeted beneficiaries to and from their respective villages and towns by Golden Veroleum Liberia.

Beneficiaries in separate remarks expressed heartfelt gratitude to LISOP for the free surgeries and lauded GVL for the cost sponsorship. The patients believed, were it not for LISOP and GVL, they wouldn’t have been relieved of their illnesses.

“This program shows that GVL cares not just for its employees but its project communities as well. The company social programs continue to impact the lives of us the poor people. We cannot allow anything to make the company to leave.” said the spokesman of the patients, Mr. Guffred N. Dweh.

“We want to thank LISOP and GVL for conducting these free surgeries for our people. This has restored the lost hopes of many of our citizens”. Said Superintendent Elizabeth Dempster.

Modern Surgery by LISOP in Grand Kru Year after Year 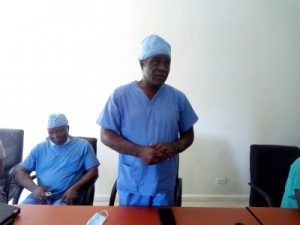 LISOP Lead Surgeon and Chairman of the Board, Senator Dr. Peter Coleman said, GVL’s sponsorship of the surgical intervention does not only show the commitment to corporate social responsibility, but displays the company’s care of improving the livelihood of citizens of the county. Dr. Coleman said LISOP, a local None-Governmental Organization (NGO) was established in 2000 by a group of professional health workers including surgeons, anesthesiologists and nurses for the purpose of providing free surgical services to rural dwellers who cannot afford to foot the bills for such a medical service.

LISOP is a Committed Partner

Mr. Darius Doe, GVL’s Communications Officer in Grand Kru, said that “LISOP is the kind of partner we appreciate working with. The team is highly qualified, professional and committed, bringing top surgical skills to Grand Kru regularly.” GVL sends employees and family members in need of urgent medical care even to Monrovia using one of company ambulances. “But bringing the some of Liberia’s best surgeons, specialists and nurses to the County makes high quality care available to all the Citizens”, said Mr Doe.