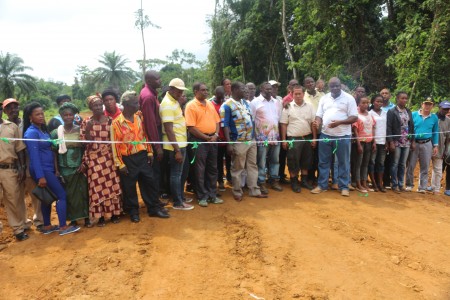 The US$52,000 road project was constructed by Golden Veroleum Liberia. Cost of the road project includes machinery, diesel and labour. The project is part of several projects agreed in the Memorandum of Understanding Incorporating Social Agreement signed between GVL and Butaw Communities on February 10, 2017.

Speaking at the dedication ceremony in Butaw, Hon. Prosper Brown called on citizens of Jimmy Doe Town in Ceedor Township, Butaw District to take ownership of the road. He said the road will now improve access to the community, local economy and put an end to long distance walking by residents.

Hon. Brown thanked GVL for demonstrating their commitment to the implementation of the MOU/SA making Ceedor community accessible by motor road.

Elder Tafawa Toteh, Women Leader Emma Klay, Youth Leader Reuben Pajibo, Township Commissioner Dadia Toteh and Paramount Chief William Klay also thanked GVL, especially Vigy, Executive Vice President for Operations, for the road and described the dedication day as a highlight in the lives of the community because the lack of road has caused many of their citizens to move to other communities in search of better living. This is the first time the township has gained access to a motor road since its foundation in the 18th century.

The Youth Leader, Reuben narrated that before the construction of the road, it was the youth that transported patients on their backs to health facilities due to the lack of road. He believes that the construction of the road has put an end to the long distance walking and transporting of local produce and patients to Greenville and health facilities.

For his part, Butaw District commissioner Togba Bestman thanked Butaw communities and GVL for the peaceful working relationship that exists between the two parties. 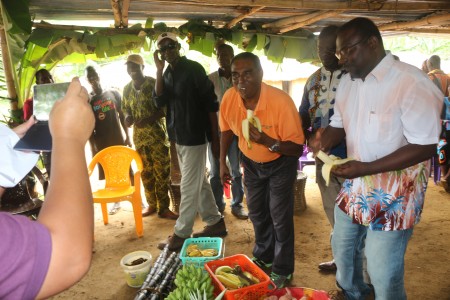 GVL’s Chief Executive Officer Burhan Telasman separately noted that other projects agreed in the MOU with Butaw citizens are ongoing. These include the ongoing construction of a 13.53 kilometers road linking Plouh community to Geekloh (Butaw seaside) and the ongoing bidding process for the construction of eight classrooms Annex to the Butaw Junior High School elevating it to High School level as well as eight rooms for teachers quarter among the projects underway.

Burhan Telasman, said: “Butaw community is now part of modern industry, as Butaw is the source of fertile fresh fruits bunches going into GVL’s mill.  In a few months we hope that Butaw will be supplying fruits to GVL’s new main mill, which will process export quality oil for the ECOWAS markets.”

Golden Veroleum Liberia is a Liberia registered long term business initiated company which seeks to work with Liberians to bring real industries and factories to Liberia especially in rural communities. GVL currently employees approximately 3,600 Liberians heavily based in Sinoe and Grand Kru counties. GVL donates annually to the Government of Liberia through the Ministry of Agriculture a scholarship grant of US$100,000 for deserving Liberian students studying agriculture and engineering. Up to date, US$700,000 has been donated to the Ministry of Agriculture. The company has deposited into 6 community accounts at least US$92,000 dollars in community development fund across Sinoe and Grand Kru counties. The construction of 3 bed rooms Butaw clinic staff quarter is the first community development fund project funded by GVL.