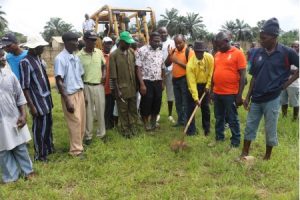 Flomo Molubah, GVL’s General Manager for Sustainability, praised the Butaw community for designating the project and for the peaceful co-existence between GVL and the community so far. Mr. Molubah maintained that GVL is committed to improving the livelihood and wellbeing of its host communities.

“We are very happy today that we are breaking grounds for the first CDF project and to see citizens of Butaw turning out peacefully. We can assure you that we remain committed to lifting up to our commitments”, Flomo concluded.

The Community Development Fund works so that every year GVL deposits money into the fund. Up to date, GVL has deposited USD 50,144.80 into Butaw CDF account alone as its contribution to infrastructure development in the district. The fund utilization is decided by the community-appointed fund commissioners while GVL’s role is to advise on technical matters and ensure proper financial procedures are followed. The Butaw community has accumulated the fund until deciding proper use.

Making separate remarks at the brief ceremony held at the clinic compound in Tue community, Nathan Kai, the Chairman of the Butaw Welfare & Development Association; Dennis Jabbah, representative of Butaw Communities on the CDF Committee; Bestman Weagbah, Butaw Township Commissioner, and other eminent citizens of the district expressed their enthusiasms about the project and lauded GVL for fulfilling its Concession Agreement commitments.

The citizens pledged that the existing relationship between GVL and Butaw will forever remain cordial, adding that whosoever will try to go against GVL in the district will be doing such at his or her own risk as the community will strongly resist such act.

“We are very happy today that we can now use money generated from our soil to carry out development in our District. This is a good start and we see it today as a symbol of peace pipe been smoked and we should not allow anyone to disturb the relationship we now have with GVL” said Nathan Kai, Chairman Butaw Welfare and Development Association.

Butaw District Health Officer, Akoi Jargbah, represented by health worker Charles Gbona, expressed gladness over the project. He said, when completed, health workers will be happy to stay in the district due to the facility which, according to him, is lacking at several health facilities in the district.

According to Alphonso Kofi, GVL’s Communications Officer in Sinoe, the $33k project is the first CDF project undertaken by GVL as other communities have accumulated the fund before deciding on projects for implementation. Mr. Kofi said the project is a part of many projects to be funded by GVL Community Development Fund in fulfillment of Article 19 of GVL Concession Agreement signed with the Government of Liberia.

GVL has developed approximately 2,500 hectares of land in the Butaw District. Overall in 2016, Golden Veroleum Liberia’s partnership communities in Sinoe and Grand Kru operated six CDF accounts where GVL deposited US$92,490.90. GVL has signed CDF charters with six communities in Sinoe and Grand kru. The communities and GVL establish committees comprising of 10 members drawn from the community, GVL and the Government of Liberia. These committees are set up to ensure effective and transparent management of the CDF funds so that the local communities may develop and manage their own social infrastructure development projects. These may include schools, clinics, hand pumps and other projects that are in addition to those undertaken by GVL as agreed in the MOUs.