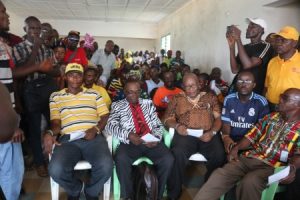 SINOE COUNTY, Liberia – it was a scene of jubilation at the Butaw Compound in Butaw District, Sinoe County on 10 February 2017 as Golden Veroleum Liberia and the people of Butaw District signed a Memorandum of Understanding incorporating Social Agreement following more than 4 years of discussion.

The signing brought together more than 400 Butaw citizens from the District and Monrovia including youth, women leaders, elders, traditional leaders, paramount chiefs and clan chiefs among others.

Under the agreement, Golden Veroleum Liberia has agreed to construct an annex of 8 classrooms for the Butaw elementary and junior high school, an auditorium for Grigsby Farm school, an 8-room teachers’ quarters in Butaw, a 2.25-kilometer road linking Tugbeh village to Ceedor Township, a 13.23-kilometer road linking Plouh community to Ceekloh, Butaw Seaside and two palaver huts to host community meetings in the District. To promote healthy water supply and better sanitation, the agreement also seeks to construct 7 hand pumps and two sets of pit latrines within Butaw District. 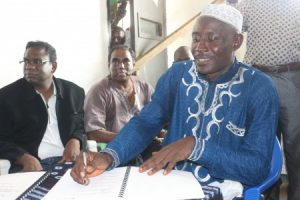 Benedict Manewah, Chairman of the Butaw A-Bloteh Committee, praised GVL for the level of cooperation received and for the MOU signed. Mr. Manewah believes, with GVL, the benefits of development for the District are now much clearer.

“I am filled with joy. I will not make confusion with GVL. I beg them now, because GVL is doing great things in Butaw, the relationship between GVL and Butaw is pleasant. I will encourage my community so that we hold GVL very well. Today, I am very happy to see the new road going to the seaside in Butaw that has never had a road connection before,” he said.

Mr. Manewah is calling on his fellow Butaw citizens to work closely with Golden Veroleum Liberia in an effort to improve the living standards of every citizen in Butaw. He mentioned that GVL should now be able to negotiate with local citizens to acquire more land from the people based on the level of development taking place in the District. He said that the people of Butaw are now prepared to give additional land to GVL because relations are now very good. 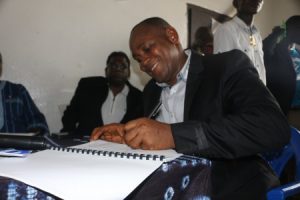 Dixon Patten, GVL’s Assistant Manager for Community Affairs and Social Sustainability in Butaw, said GVL is committed to implementing the MOU. Mr. Patten said it is important to GVL to maintain excellent community relations as it will be working with the community for a long time.

“Relations between the people of Butaw and GVL have improved and we will continue to keep it this way. We believe we now have one of the best community engagement processes in Africa,” said Patten.

According to GVL’s Communications Coordinator, Leroy Kanmoh, GVL has a strengthened communications strategy with communities and other stakeholders in Liberia. Mr. Kanmoh said that, in 2012, the people of Butaw complained to the governing body for responsible oil palm companies, the Roundtable on Sustainable Palm Oil (RSPO). In 2013, GVL hired the services of an independent consultant, The Forest Trust (TFT) to assess its community engagement procedures and to help GVL make recommended improvements.

Kanmoh said GVL fully implemented the TFT recommendations and developed a robust Free Prior and Informed Consent process. Following long negotiations whch settled the key concerns raised by the Butaw communities, in 2015, the Butaw communities wrote to the RSPO withdrawing their complaint.

Mr. Kanmoh said the RSPO then wrote to both parties to work together to negotiate and sign a MOU, after which the RSPO would be able to close the complaint.

Golden Veroleum Liberia is a Liberia registered long term business initiated company which seeks to work with Liberians to bring real industries and factories to Liberia, especially in rural communities. GVL currently employees approximately 3,800 Liberians heavily based in Sinoe and Grand Kru counties. GVL donates annually to the Government of Liberia through the Ministry of Agriculture a scholarship grant of US$100,000 for deserving Liberian students studying agriculture and engineering. Up to date, US$700,000 has been donated to the Ministry of Agriculture. The company has deposited into 6 community accounts at least US$92,000 dollars in Community Development Fund (CDF) across Sinoe and Grand Kru counties. The construction of 3-bedroom Butaw clinic staff quarters is the first CDF project by GVL.